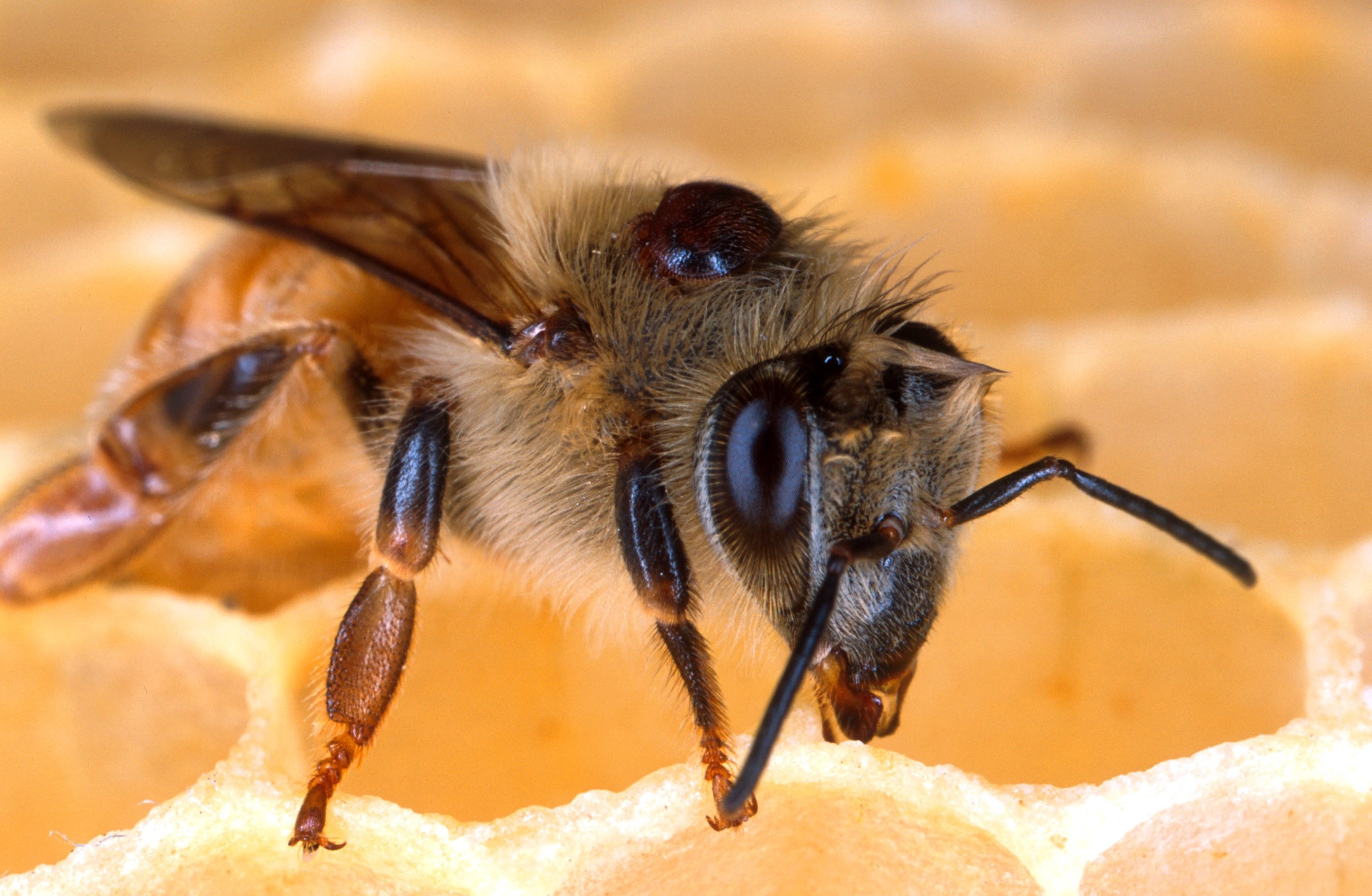 IS WHAT WE KNOW AS HONEY A CLEAN FOOD ACCORDING TO THE SCRIPTURES OF YAHWEH?
When we spread honey on our bread, cereal or pour it on our tea using it as a sweetener, do we realise that we are consuming the nectar of sweet flowers?
The bee, that small flying creature that can hurt us with a painful sting, is the one that gathers that floral juice or nectar and takes it to its hive. The worker bee has a small pouch for the honey which “is not too different from the crops of birds”. In it, the bee takes the nectar of the flowers to its hive.
Beloved, while the floral juice remains in this little pouch, it thickens and becomes that delicious thing that we call honey. The bee deposits it in the honeycomb, ready to be eaten.
In the past, it was thought that the chemistry of the bee did not interact with the honey while it was stored and transported in that little pouch. But later it has been proven that the bee secretes certain enzymes that alter the floral nectar as it takes it to the hive. But contrary to other animals (sheep, cows, goats, camels, cats, raccoons, etc.) that produce milk after digesting and processing their food, the bee never gets to digest the honey.
What does all this have to do with honey being biblically clean or not?
In accordance to a certain part of the Scriptures,  some think that the bee is an insect that apparently does not fit in the proper definition given by Yahweh in His Word of what is biblically clean.
To be sure the rabbis discussed this question in the Talmud (, and maybe they started the controversy!
The Rabbinic Mishnah declares:
“that which comes from something that is not kosher, IS NOT KOSHER and that which comes from something that is kosher is kosher.”
It sounds logical. So, using this logic, camel’s milk or the eggs of a vulture are NOT kosher same as their meat. Based on this logic, they say that honey IS NOT KOSHER.
If the bee is not kosher then, why are there apparent cases in the Scriptures in which honey from the bee is permitted?
Let us examine the Scriptures, against what the rabbis say and what we think through our logic, to see who is right in all this:
Yahweh says that these insects can be eaten:
The bee truly does not have <jointed legs above their feet with which to leap on the earth>. So, the bee is not kosher in this sense. However, we cannot stop here. In Scripture, there are many more things that are written.
But to comply with everything that is written, we cannot rely on one part of one text. We have to examine ALL that is written. The first thing we have to consider is how many feet does the bee have and how does it walk with them? Because, beloved, the Scriptures say that <all other flying insects which have four feet is an abomination to you>.
The bee has wings but has six feet, and it DOES NOT WALK WITH FOUR of them, as the mosquito walks, it walks with all six!
Therefore, <all other flying insects which have four feet is an abomination to you> does not apply to the bee, because it walks on six feet.
Now it looks like the bee is not included in the NO-kosher insect list. Now it seems that the little bee is KOSHER!
Are the bee and HONEY, it’s product, kosher or not?
How can we be sure that Yahweh does not condemn its consumption? Is there any evidence in the Scriptures?
Certainly, beloved, there is more evidence. To reach sound doctrine on any matter, we have to look for the Truth <a little bit here and a little bit there>, as Scripture itself teaches us.
That way we will know if it is true or false that in «eretz» Israel (the land of Israel) the only honey that is consumed comes from figs or dates…
Now we will see, again with the holy Word of Yahweh itself, if there was bee honey in «eretz» Israel…
EVIDENCE #1
Here is the first evidence and presented by, no less, wisest man that ever existed, Solomon. And he is not talking about ordinary fig honey,  but of bee honey, honey from the HONEYCOMB!
EVIDENCE #2

EVIDENCE#3
Speaking of Yohanan the Immerser (John the Baptist)] Matthew writes:
John, the famous prophet who made a“Nazarite vow”(not to be confused with “Nazarene”), who announced and immersed Yahshua Ha Mashiach, ate the same honey that David, Solomon, Abraham and the other servants of Yahweh ate! Again, what does Yahweh say in the Torah regarding the existence or not of bees that produce honey in the promised- land? Does He reveal if it was forbidden or not? We just saw it! What is more important for you, brother or sister that Yahweh has called to His holy Truth: Yahweh’s own holy Word, or the Mishnah, the Talmud,… or other mortal human writings?
Now,  some servants of the enemy ha Satan use the following verse to claim that HONEY FROM BEES CAN NOT BE EATEN, knowing that it is not so and hiding vital information that is given in that same passage:
EVIDENCE#4

But, again, they are making an assumption. They are “making doctrine” with a portion of the passage, my beloved, and that is a sin. We have to consider all the evidence and see the whole CONTEXT, to see what is being said there and not fall into a trap.
Now we shall examine the verses that appear BEFORE and after and we will see that the people did not eat honey, but it wasn’t because it was not Biblically clean or because it was forbidden as a food!

It is very clear there. King Saul had made the people swear that they would fast that day. That was all! That is why they couldn’t eat the honey that they found!
Now let us look at evidence #6, to see that certainly there is honey in the Scriptures and it can be eaten.

EVIDENCE#6
Honey is an energetic food. We all know the story of Jonathan, the son of King Saul and a dear friend of Dawid and how he brought the tired Jewish armies to victory in their war against the Palestinians (Philistines). He was tired and dismayed after the arduous battle, then he found a beehive, took honey from it with the tip of his rod and ate <and his eyes lit up>, because his energy was restored.

Jonathan was a Jew and he kept Torah. He knew which food was Biblically clean and which was not!

Judges 14:8-9 explains that Samson also ate honey. Here is one instance and this is:

EVIDENCE#7
This is a case of simple common sense. You could understand this even if you didn’t have the Set-Apart Spirit. Even a child of four can understand it, my dear ones. This wasn’t the so-called “fig honey” nor “date honey”! They don’t come in honeycombs !
The Scriptures never shows Yahweh condemning any of these servants for having eaten honey! And as I always say, I am doing my duty before our Father Yahweh by warning you against lies and heresies, my friends, because I am a fearful servant of Yahweh who has to answer to Yahshua you the sheep if I don’t warn you and you get lost.
But my responsibility ends there. It ends with <he who has ears to hear, let him hear>…
Handle the Word correctly and do not let yourselves be deceived, so you are not condemned.
Well, as if we haven’t read enough, here is more evidence numbers EIGHT, NINE, TEN, ELEVEN, TWELVE, etc. that prove beyond any doubt that certainly,  BEE HONEY IS MENTIONED  in the Scriptures and that its consumption IS NOT CONDEMNED BY YAHWEH.
Although honey is highly esteemed in the Scriptures, there is a strict prohibition against bringing an offering of honey to the altar of the House of Holiness or Temple. In this context, honey is treated as leaven, which is also forbidden in the offerings, not because they are not Biblically clean (both of them are) but because they weren’t suitable for the offerings.
Even incense could not have a single drop of honey due to that prohibition. The Torah doesn’t really explain why honey can not be offered at the altar but we argue that honey, the same as leaven, causes fermentation and is a symbol of the rebellious and proud nature of man which gets worse as the centuries go by.
The prohibition of honey and leaven is to remind us that Yahweh detests arrogance and vanity, but loves humility and self- discipline. Consequently, all the baked bread that was brought to the altar had no honey nor leaven. The only exception was the wheat loaves that were offered as First Fruits in the festival of Shavuot (Pentecost).  These loaves were leavened. But they were not offered at the altar but given to the or priests.
Referring  to the words of the Scriptures that the true Israelites of Yahweh (today under Yahshua) talk, study and obey, King Shlomo (Solomon) said :
The apostle John said the same thing about the Truth that Yahweh revealed through the Messiah for the “last days”, in other words, the prophecy of Revelation:

The Scriptures and the Commandments <are sweeter than honey and the honeycomb> said King David in Psalms 19:10.
Taken from a teaching byYhemaelh Zeev
Translated from  Spanish by Nazarenes Notes

Unless otherwise noted, all Scripture is  from The Scriptures,
Copyright by Institute for Scripture Research.
Used by permission.