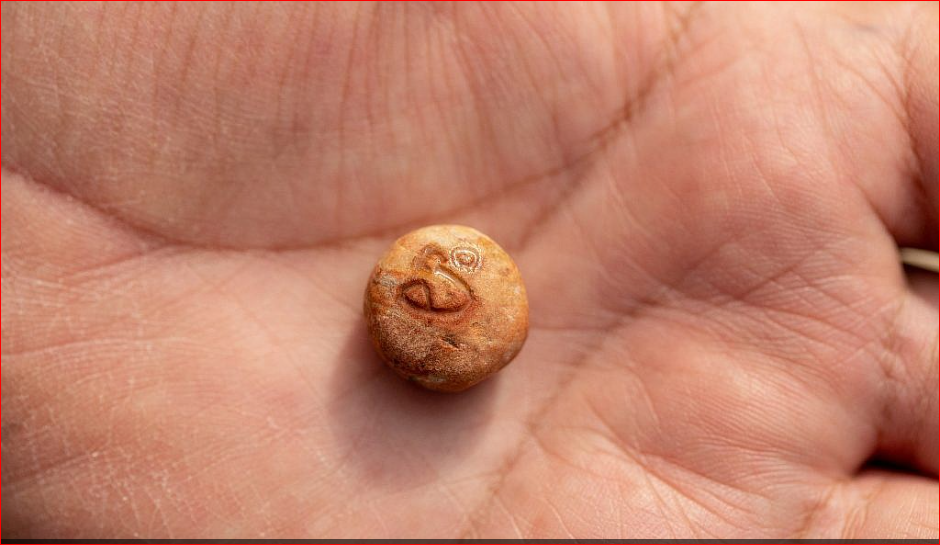 An extremely rare, minuscule biblical stone weight inscribed in ancient Hebrew script with the word “beka” was discovered in rubble taken from excavations at the foundations of the Western Wall.
Only a handful of similar stone beka weights have been unearthed in Jerusalem, said archaeologist Eli Shukron, who directed the excavations on behalf of the Israel Antiquities Authority. He told The Times of Israel that none had previously been found with this exact inscription.

The “beka,” a First Temple-period weight measure used by pilgrims paying their half-shekel tax before ascending to the Temple Mount, was recently discovered by a volunteer in the City of David’s wet sifting project in Jerusalem’s Emek Tzurim National Park.

The word “beka” appears twice in the Torah: first as the weight of gold in a nose ring given to matriarch Rebecca in the Book of Genesis, and later in the Book of Exodus as a weight for the donation brought by the Jewish people for the maintenance of the Temple and the census, as recorded in Exodus 38, Verse 26:

The beka stone was discovered in dirt taken from 2013 excavations under Robinson’s Arch. According to Shukron, the earth came from a drainage canal under the foundation of the Western Wall.
This beka is the only example to date of the inscription being written in “mirror writing,” said Shukron, and the letters are engraved from left to right instead of right to left. For example, the letter “bet” incised into the small stone is facing the opposite direction.
“This is the only one not written ‘properly,’” Shukron said, which leads him to conclude that the artisan who formed the weight also created seals, which are written in mirror script.

“Apparently, the seal craftsman got confused when he engraved the inscription on the weight and mistakenly used mirror script as he was used to doing. From this mistake we can learn about the general rule: the artists who engraved weights during the First Temple period were the same artists who specialized in creating seals,” said Shukron in a press release.
Unlike several hundred years later, during this era, there was no half-shekel coin. Pilgrims brought the equivalent weight, a beka, in silver to pay their tax, which would have been measured out on scales in the very spot under the Temple Mount where the tiny stone weight was unearthed.

The ‘beka’ biblical weight stone was discovered in earth taken from a 2013 archaeological excavation at the foundations of the Western Wall in a drainage ditch (seen here at bottom left in an October 17, 2017 photo) directly under the Robinson’s Arch. (Amanda Borschel-Dan/Times of Israel)
Shukron said in a press release, “When the half-shekel tax was brought to the Temple during the First Temple period, there were no coins, so they used silver ingots. In order to calculate the weight of these silver pieces they would put them on one side of the scales and on the other side they placed the Beka weight. The Beka was equivalent to the half-shekel, which every person from the age of 20 years and up was required to bring to the Temple.” According to the release, the biblical shekel weighed 11.33 grams.
The first coins bearing Hebrew script were inscribed with the word “beka” and date from the 5th century BCE, according to a 1993 Biblical Archaeology Review article. The beka coin was minted by permission of the Persians, wrote article author Oded Borowski.

Other measures in the Bible include the kesitah, kikar (talent), shekel, beka, mina (maneh), gerah and pim. There is a uniform system of weights and two beka equal one shekel, while 10 gerah equal a beka.
Shukron is unsure whether all the discovered beka stones are of uniform weights. But after holding it in his hand, said Shukron, he can feel it is extremely light.
What is key to Shukron is the location of the find: right next to King Solomon’s Temple.
“This is a word that is used both inside and outside of the Bible. You don’t need to ask too many questions, just open the Bible and see it. It’s very simple. You can see beka written in the Bible and what it was used for, and there you have it,” he said.

“The Bible, the artifact found close to Solomon’s Temple, north of the City of David, the Temple foundations – everything is connected,” said Shukron.
During the Hanukkah festival early next month, the beka stone weight will be on display to the general public at the IAA’s sifting facility at the Emek Tzurim National Park. “This three thousand-year-old Beka weight, inscribed with ancient Hebrew was likely used in the First Temple, anchoring once again, the deep historical connection of the Jewish People to Jerusalem,” said Doron Spielman, Vice President of the City of David Foundation which funded the excavation.
[THE TIMES OF ISRAEL]
timesofisrael.com