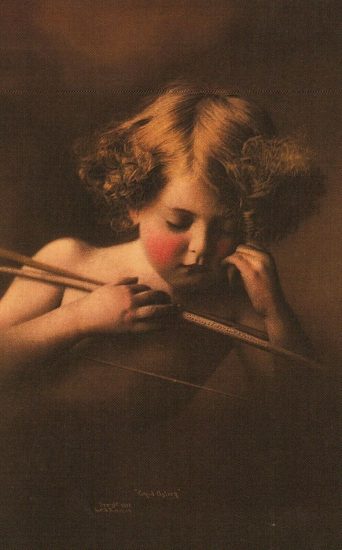 Cupids are everywhere with bows and arrows, heart shapes, paper lace, birds, and flowers. All these are associated with St. Valentine’s Day. But just where did these symbols and celebration of the 14th of February come from? Most of all, should we be celebrating this seemingly innocent day on which so many remember sweethearts and lovers?

A PRIEST WITH A HEART
The origin of this day is not clear, as there is more than one explanation. The most accepted legend is that a Roman priest named Valentine had a special feeling for young people.
When the Roman Empire needed soldiers, Emperor Claudius II decreed that no one could marry or become engaged. Claudius believed that marriage made men want to stay at home instead of out fighting wars.
The kindly Valentine defied the Emperor’s decree and secretly performed weddings for a number of young couples. He was arrested, imprisoned, and put to death. Another legend holds that Valentine was aiding persecuted Christians and was imprisoned. A jailer and his family were so impressed by his sincerity that they became Christians themselves. Valentine was fond of the jailer’s blind daughter and by a miracle restored her sight. On the morning of his execution he sent her a farewell message signed, “From your Valentine.”

FEBRUARY 14 FERTILITY
Valentine was beheaded supposedly on February 14. Not so coincidentally, this is also the eve of an important and more ancient Roman festival, the Lupercalia. (Lupus is Latin for wolf.) On this evening Roman youths drew names of girls who would be their partners during this ceremony.
To the Romans, Lupercalia was serious business. Mark Antony was master of the Lupercali College of Priests. He chose the Lupercalia festival in 44 B. C. E, as the proper time for offering the crown to Julius Caesar.
On February 15 the Luperci priests gathered at the cave of Lupercal, where according to legend, Romulus and Remus — founders of Rome — were nursed by a mother wolf.
Following a sacrifice, two youths of noble birth were brought forward. After a ceremony, they ran through the Roman streets, lashing about with goatskin thongs. The streets would be crowded with young women because a lash of the sacred thong was believed to increase their fertility.
The goatskin thongs were called februa and the lashing the februatio, both stemming from a Latin word meaning to purify. From it comes the name for the month February.
Long after Rome had become a walled city and the seat of a powerful empire, the Lupercalia lived on. When Roman armies invaded what are now France and Britain in the first century B.C.E., they took with them many pagan customs. Included was the Lupercalia.

PAGAN-CHRISTIAN MERGER
By the fourth century Christianity became the dominant religion in Rome and the Lupercalia was declared unlawful. Throughout the empire the church endeavoured to stamp out pagan practices brought in by the heathen.

“Unable to abolish some of the pagan festivals that the people loved, they accepted these and gave them Christian names,”
The Story of Valentine Symbols, by Edna Barth.

“So it was with the Lupercalia, which survived late into the fifth century. St. Valentine’s name was given to a festival that had celebrated springtime and fertility in human beings and other animals. And, do what the church might, the ancient meaning never quite left it. Memories of the Lupercalia as a celebration of mating were handed down, attaching themselves to the saint’s name.”

It was the eve of the ancient feast of the Lupercalia, when Romans habitually preserved the memory of an ancient rural deity, Faunus.
It is not difficult to imagine that the public beheading of Valentine the Christian was a pagan’s victory — here was a priest who upheld the Bible beheaded at this heathen celebration!
Frank Staff writes in his book, The Valentine and Its Origins,

“In later years when the early Christian fathers were busy obliterating pagan superstitions and dates by substituting those of the Christian belief, names of many of the martyred Saints were used to replace the old festivals.
“In this way St. Valentine, having suffered on the eve of the Lupercalia, the 14th of February, was now to perpetuate forever the memory of this festival of the return of the Spring when a young man’s fancy lightly turns to thoughts of love and when the birds begin mating.
“Centuries later it was usual on St. Valentine’s Day for young men to draw by lots the names of young women, a custom that lingered in some of the more remote villages of the British Isles right up to Victorian times. Some accounts written during the Victorian era of St. Valentine’s Day maintain that the putting of the names of young women into a box to be drawn for by the men was part of the ceremony of the Lupercalia, and has been repeated so often as to be believed true. But it has been authoritatively stated that this has yet to be proved.”

Not all historians agree with Staff, and see a direct connection between drawing names for Valentine’s Day and the Lupercalia.
Strong evidence also exists that the custom of sending valentines and other rituals on February 14 has erotic origins and it likely was a licentious festival. Lupercalia was a spring festival involving peculiar fertility rites and especially involved the young people.
The little cherub called cupid, from the Latin cupido or “desire,” is actually the Greek deity of love known as Eros. Alexandrian poets made him popular in Rome (Funk and Wagnalls Encyclopedia, p. 2542)
Valentine’s Day customs in the United States trace to early settlers from Germany and Britain.

BOTTOM LINE: THE DOLLAR SIGN
Valentine’s Day is immortalised by manufacturers of greeting cards and candy, florists and clothiers — merchants who see the chance to induce customers through yet one more holiday to part with their money. “If you don’t give a gift at Valentine’s Day you don’t love others” is the subtle message.
The big problem with involvement in worldly holidays and special days of man is their rank pagan origins that have nothing to do with Scriptural worship. Even more, these days have replaced the true, Biblical observances commanded by our Creator. Paganism has always sought to replace True Worship. The one condemnation Yehovah repeatedly levelled against Israel was their desire to participate in the heathenism of those around them and worship other deities in place of Yehovah .
We as believers must never place anything before Yehovah and His way of life. We must give up the ways of a deceived world that has no love of Yehovah .

It is amazing how much our world is steeped in heathen, truth-supplanting tradition. The days of Lupercalia are with us even in subtle ways.
As one writer observed, “Today we still refer to one who fancies himself with the ladies as something of a ‘wolf,’ and when a pretty girl walks down the street young men give a ‘wolf whistle,’ which shows that the spirit of the Lupercalia is still with us.”
Yehovah true spirit is here as well, and available to those who have a real desire to live honestly and purely for Him. A position of ruler-ship in His coming Kingdom awaits those who do.
[For more information on Valentine’s Day see “ST. VALENTINE’S DAY-CHRISTIAN CUSTOM OR PAGAN PAGEANTRY“]

by HOIM Staff
Hope of Israel Ministries — Preparing the Way for the Return of Yehovah God and His Messiah!
hope-of-israel.org