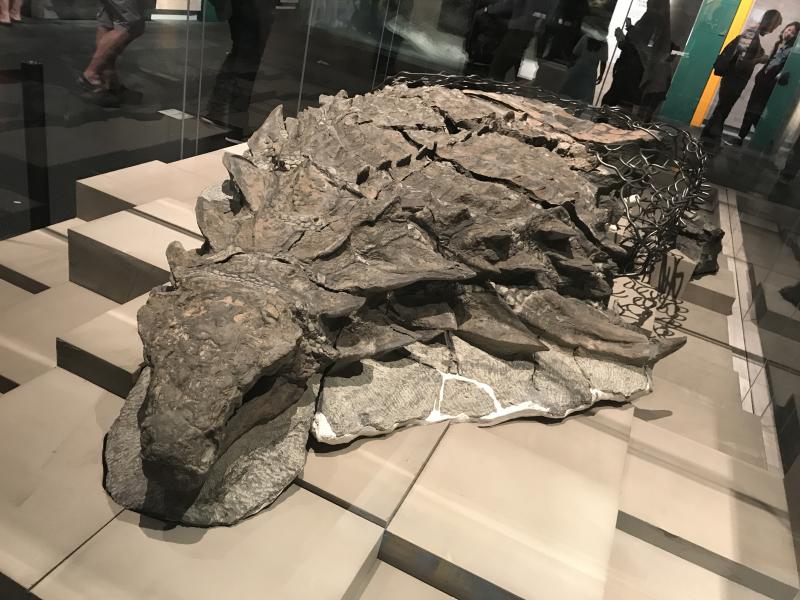 We have now got used to the idea that there are dinosaur fossils containing soft tissue. Our familiarity with such finds has begun to dull the edge of the surprising import of such finds. Whichever way you spin this, the presence of soft tissue is not consistent with evolutionary ages for the dinosaurs.
Perhaps this sense of surprise, for the evolutionist, will be rekindled by the discovery of dinosaurs complete with skin, scales and pigments. One such dinosaur find is that of Borealopelta markmitchelli. This amazing specimen caused one expert to remark that it “might have been walking around a couple of weeks ago”.
When the protein molecules of such organisms break down, they form secondary proteins called kerogens. These molecules have been found in this dinosaur. Although the exact lifespan of such molecules has not been fully researched, it is clear that they cannot last anywhere near as long as the required 112 million years – the date assigned to this dinosaur.
Similarly, pigments like melanin have been found in the scales of the dinosaur. Experiments have suggested that the lifespan of melanin is only thousands of years. Yet, this dinosaur is not the only discovery in which such melanin has been found, even though there is no scientific mechanism by which such pigments could last the millions of years required.
These dinosaur finds are troubling to evolutionists. But they are fully consistent with a biblical worldview, confirming as they do the Bible’s timescale for Creation and the Flood.
Prayer:
Your word, O Lord, is always true. We thank You that You have graciously provided evidences consistent with Your word. We pray that we might trust You completely because we believe what You have said. Amen.
Notes:
Ref: Thomas, B. (2017) Spectacular Dinosaur Has Skin, Horn, Pigments, < http://www.icr.org/article/10194 >. Image: Machairo, license: Creative Commons Attribution, Share-Alike 4.0 International.
For more articles like this please visit:
creationmoments.com