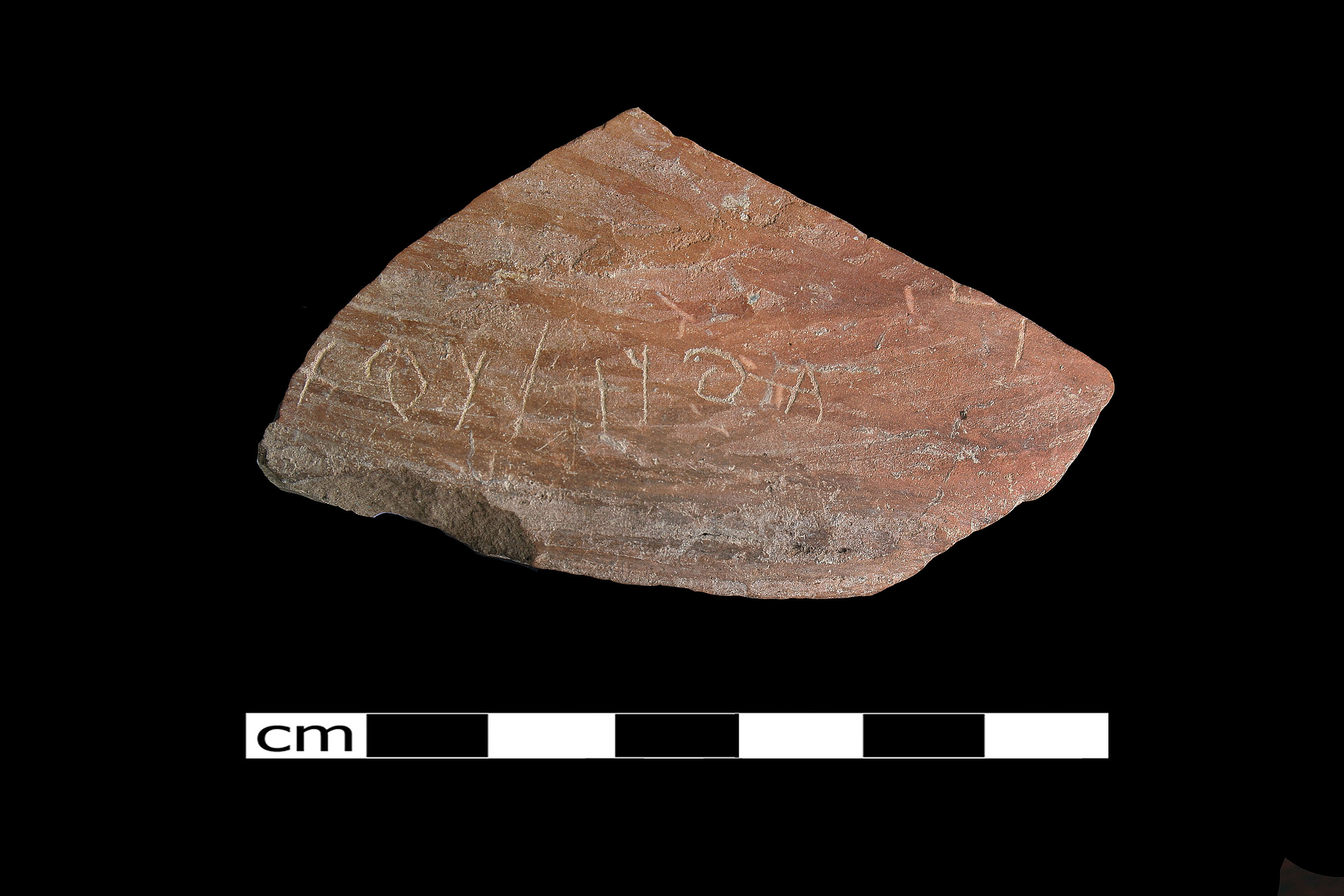 TWO NAMES scratched into a small shard of pottery are all that appear in the oldest Philistine inscription ever found. Though the names are Philistine — the one on the right may be the equivalent of Goliath — the letters themselves are Semitic, thus demonstrating that the Philistines (a sea-faring people from the Aegean) absorbed aspects of Semitic culture once they settled on the coast of modern Israel.

The oldest Philistine inscription ever discovered was recently excavated in Goliath’s home town of Gath (Tel es-Safi) by an expedition headed by Aren Maeir of Bar-Ilan University.
The inscription was scratched with a needle-like instrument on a small pot-shard and dates from the tenth to mid-ninth century B.C.E. Of the two names on the sherd, the first consists of four Semitic letters: TWLA [Hebrew font, alef-lamed-vav-tav], which Maeir says may be the equivalent of the name Goliath. Although it was written with Semitic letters, the name is apparently Philistine. The Philistines were a people who originally came from the area around the Aegean Sea, and who probably spoke an Indo-European language, possibly similar to ancient Greek. When they migrated to the coast of modern Israel, they gradually adopted aspects of Semitic culture, including the alphabet, but retained their own Philistine names and some aspects of their Philistine language.
Maeir stresses that the Goliath of the inscription from Gath is not the Biblical Goliath. Most scholars regard the Goliath story as legend rather than history. The inscription does, however, give a real-life context to the story, and it demonstrates that the name Goliath was probably in circulation in Gath about a century or so after the legendary battle between David and Goliath, according to the Biblical chronology.

1) The stratigraphic context of the shard dates it to the 10th to the early 9th cent. BCE.
2) The shard is a type that is typical of the 10th-9th cent BCE, both at Safi and at other sites.
3) BOTH names that appear on the shard (AWLT and WLT…) are etymologically very close to Goliath. All are quite similar to Indo-European, names such as Lydian Wylattes/Aylattes, which in the past have been etymologically compared to Goliath (way before this find).
4) It is the earliest Philistine inscription that is deciphered and written in Semitic letters. There are several other possible (with a very strong stress on the possible) undeciphered inscriptions (possibly in an Aegean type script) from Ashdod, as well as possibly Aphek and Tell Deir Alla. It is also one of the earliest Proto-Semitic inscription that is both well-dated and from a clear archaeological context (not from the antiquities market …)
5) It shows, quite clearly, that the Proto-Semitic script was still in use in the 10th/9th cent. BCE.
6) Bottom line: 1) the inscription demonstrates that ca. the 10th/9th cent. BCE, names very similar to Goliath were in use at Philistine Gath. This does provide some cultural background for the David/Goliath story; 2) that already early in Iron IIA, the Philistines adopted the Semitic writing systems.