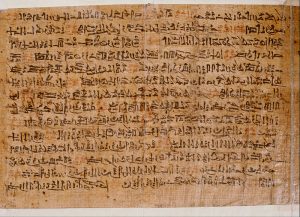 The Ipuwer Papyrus (officially Papyrus Leiden I 344 recto) is an ancient Egyptian hieratic papyrus made during the Nineteenth Dynasty, and now held in the Dutch National Museum of Antiquities in Leiden, Netherlands.[1] It contains the Admonitions of Ipuwer, an incomplete literary work whose original composition is dated no earlier than the late Twelfth Dynasty (c.1991-1803 BCE).

In the Admonitions a man named Ipuwer complains that the world has been turned upside-down, and demands that the “Lord of All” remember his religious duties and destroy his enemies.[1] The poem is considered the world’s earliest known treatise on political ethics, suggesting that a good king is one who controls unjust officials, thus carrying out the will of the gods.[3] Ipuwer is often put forward in popular literature as confirmation of the Biblical Exodus story, but these arguments ignore the many points on which Ipuwer contradicts Exodus.[4]

Truth be told, the Egyptians were renown for engaging in historical revisionism.
The oldest treaty we know of in the world is the Treaty of Kadesh1 (ca.1269 before Yeshua), which was a peace agreement, signed between Egypt and the ancient Hittite Empire.  In fact, a replica of it can be found in the United Nations Building.

If you were to look at strictly Egyptian sources, you would think the Egyptians pulled off a spectacular victory over their Hittite foes. Egyptian accounts of the conflict are found in ancient papyri as well as in reliefs carved in temple walls (such as at Luxor).  If you had only these to go by, you may not get the full story. Other ancient (and non-Egyptian) accounts have recently been uncovered that suggest the Hittites held the upper hand at the end of the engagement2.
Even with this tendency to remove from historical memory troubling episodes, is there any Egyptian source that speaks to such cataclysmic events as the Biblical plagues?  You would think with such upheaval, there would be some national memory or ancient source attesting to such devastation.  Sure enough, there is!

In the National Archeological Museum in Leiden, Netherlands is found the Ipuwer Papyrus3.  The manuscript itself was discovered in Memphis, Egypt and dates to the 13th Century BC  or within a century or so after the Exodus plagues occurred.

The similarities to the account of Exodus are striking4 :

Now some Egyptologists will argue that the work is merely a poem, a kind of satire, or even a theodicy
[theodicy: the problem of how to reconcile a just God with a world containing evil]. Further, they will say that the ultimate source for this papyrus must go much further back5than the period in which Moses is penning Exodus.  Even one of the sources we used to provide a translation for the Ipuwer text here holds this view6.

Quite frankly, I am not convinced they are correct.  Neither are other experts . It seems more likely to me that the Ipuwer Papyrus is an Egyptian version or recollection of the traumatic events described from Exodus 7 through Exodus 12.
1. http://www.unmultimedia.org/photo/detail/111/0111527.html
2. http://www.stanford.edu/~aykutkoc/papers/Kadesh.pdf (pages 2 and 3) 3 http://www.henryzecher.com/papyrus_ipuwer.htm
4. http://www.specialtyinterests.net/ipuwer.html
5. http://www.statemaster.com/encyclopedia/Ipuwer-papyru
6. http://nefertiti.iwebland.com/texts/ipuwer.htm
This article and others like it can be found at http://christianevidences.org