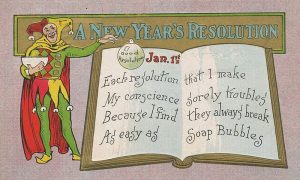 [The authors of this article William H. Ellis and D. Keyser use YEHOVAH when referring to the Eternal in the original article]

How did the celebration of New Year’s Eve begin?
Why is the beginning of a year placed in the middle of a dead winter?
And where did the many customs surrounding it originate?

MOST people carelessly assume that celebrating New Year’s Eve is a Christian custom. But did the practice of “waiting the old year out” really come from the Bible?
Is January 1 the true beginning of a new year? Who has the AUTHORITY to determine when a new year begins?

New Year’s is one of the oldest and most universal of all pagan TRADITIONS! The custom of celebrating it has remained essentially unchanged for 4,000 years!

“There is scarcely a people, ancient or modern, savage or civilised,”

“which has not observed it…in one form or another. Yet no other festival has been celebrated on so many different dates or in so many seemingly different ways.”

Yeshua said it is possible to WORSHIP the Eternal — to venerate the NAME of the Messiah — and still do it ALL IN VAIN!

Many people will confess, when forced to, the pagan origin of these days. But they stubbornly REFUSE to stop observing them! The Eternal is their Judge!
Don’t you make this mistake!

WHEN DOES THE ETERNAL BEGIN THE NEW YEAR?
Remember! It is the Eternal Almighty who created the Universe. He set the heavenly bodies in their courses at Creation. It is by His “master-clock” that time is determined.

The earth’s rotation regulates the length of a day — the lunar phases indicate the length of a month. And the orbit of the earth around the sun dictates the length of a year!
But ONLY the Eternal has the AUTHORITY to set the date of the beginning of the new year!
The Eternal’s sacred calendar year begins in the spring — not in the middle of a dead winter! Notice:
The first month of the Eternal’s sacred calendar is called, in the Bible, «Abib». It means the month of “green ears.” Later, the Jews called it «Nisan» – a Babylonian word having the same meaning.
It was in the month of Abib or Nisan that Israel came out of Egyptian captivity under Moses (Exodus 34:18). The Hebrew month Abib overlaps the months of March-April on the pagan Roman calendar in use today.
The Eternal placed the beginning of the sacred year in the early spring to mark the beginning of the seasonal harvests. The two annual harvests in Palestine foreshadowed the Eternal’s Plan for the twofold SPIRITUAL harvest of souls to be born into His Kingdom.
Your Bible speaks of a great false religious system that will “think to change times and laws” (Daniel 7:25). This system has deliberately thought to change the beginning of the Eternal’s calendar year in an attempt to hide the Eternal’s Plan for the salvation of mankind! But man has no authority to change the Eternal’s “master-clock.”
Satan, however, has cleverly deceived the world into believing the new year begins on January first!
WHY NATIONAL CAPTIVITY?
The very same pagan practices the Eternal condemns in the Old Testament are being perpetuated in our modern world today!
The very same festivals of paganism adopted by ancient Israel have become an integral part of this modern society!
Read, in 2 Kings 17:15-18, the reason why God Almighty took ancient Israel into captivity:

What was the result of Israel following the customs of the heathen nations around them?

Israel NEVER returned as a nation to the land of Palestine!
Israel was lost! Its true identity was concealed until modern times! Now there is proof that the lost ten tribes of ancient Israel migrated to North-western Europe. The chief peoples among them have become the United States and British Commonwealth today!
MODERN PAGANISM WILL BE PUNISHED!
Do you suppose the Eternal has changed His mind about compromising with paganism?
This same reminder is repeated in Hebrews 13:8.
Speaking to the modern nations of Israel today, the Eternal Almighty says,
In other words, the Eternal is saying, “Be pagan if you insist; but quit calling it Christian.”
the Eternal continues to warn modern Israel against the holidays of paganism, in Hosea:
Notice that these were Israel’s feast days — those Israel had acquired from the pagan nations around them — NOT those the Eternal had originally instituted through His Bible!
The very same punishment awaits any nation today that forsakes the Eternal’s law as revealed in His Holy Bible, and turns to the customs of pagan nations — observing pagan days of worship!
Does it make any difference if YOU continue observing pagan customs — like New Year’s? IT CERTAINLY DOES! The Eternal says so!
WHAT YOU SHOULD DO
The Eternal Almighty prophesies a final revival of Babylonian religion in great power just before He cuts short man’s misrule of this earth. Read His warning in

New Year’s celebration began in Babylon 4,000 years ago. It is practised today by almost every people on the face of the earth. Satan the Devil has indeed deceived the whole world! (Revelation 12:9)

But the Eternal Almighty has sent His ministers to warn this world — to cry aloud, and spare not, and SHOW HIS PEOPLE THEIR SINS – Isaiah 58:1. Punishment will not be forever withheld!
May the Eternal help you to HEED THIS WARNING, and FORSAKE THE PAGAN PRACTICES of this modern world!
William H. Ellis and D. Keyser
The Eternal is referred to as Yehovah God in the original article.