Skip to content
The verses used in this article are from a Hebrew manuscript from the Cambridge University Library, ms. Oo.1.16.  found in a Jewish Synagogue in Cochin, India in 1804. 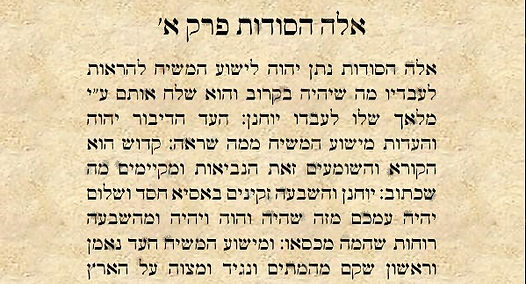 Many people perceive the Book of Revelation as a difficult prophetic book, partly because it can be challenging to reconcile certain prophecies in the Old Testament with those given in Revelation. For example, Revelation 22:5 translated from Greek says:
Night will no longer exist …1
And chapter 21:25 states:

its gates will never be shut by day, for there will be no night there.2

Based on the above verses translated from the Greek version of Revelation, many scholars1 have concluded that the day–night cycle will cease on the new earth, and that it will always be day as “its gates will never be shut by day, for there will be no night there.”2

YHWH himself also declared that Sabbaths and New Moons will be kept on the new earth:

“For as the new heavens and the new earth which I will make, will remain before me, declares YHWH, so will your offspring and your name remain. And it will be, that from Sabbath to Sabbath, and from New Moon to New Moon,3 all flesh will come to bow down before me, says YHWH. “4

1 See e.g. Exposition of the Book of Revelation, New Testament Commentary, vol. 20, pp. 579, 582: “the cessation of night… … …in the new creation the cosmic division of night and day will have ceased to function”; Revelation, Baker exegetical commentary on the New Testament, p. 764; The New International Greek Testament Commentary, The book of Revelation, p. 1096; The Teacher’s Commentary, p. 1088; etc.
2 Rev. 21:25, translated from Greek.
3 Or “every week on the Sabbath, and every month on the New Moon…”
4 Is. 66:22-23, translated from the Masoretic Text.

Without the day and night cycle, Sabbath is impossible, and without the lunar cycles, new moons are impossible too.
In Jeremiah chapter 33, it is stated that the day-night cycle is just as permanent as YHWH’s covenant with David!

Yeshua Messiah is the ultimate fulfilment of this prophecy about the ‘Son of David.’ So how can we on the one hand believe that the day-night cycle will cease, but on the other hand still think that the covenant with David regarding the Messiah will never be broken?
Based on the above-mentioned verses from Isaiah and Jeremiah, there is absolutely no way that the day-night cycle will cease. So, why does the Greek Revelation only mention daytime in chapter 21:25 as if there will be no night at all?

“…its gates will never be shut by day, for there will be no night there.”2

“And your gates will be open continually, day and night they will not be shut, for there will not be night.”

In this Hebrew version of Revelation there is no hint that the day-night cycle will cease as it clearly mentions both “day and night.”

But, how is it possible that “day and night” “there will not be night”? How can there be night, and at the same time, no night? This is only a seeming contradiction. In Hebrew, ‘night’ and ‘darkness’ are synonymous.2

The very first mention of ‘night’ in the Bible (Genesis 1:5), is where Elohim calls ‘the darkness’ ‘night’!

1 Note that there are some minor differences between these verses in the Hebrew Revelation and the Masoretic text. This clearly shows that these phrases were not fraudulently inserted into Revelation just to conform it to the Old Testament. If that were the case, then why would there be any differences from the Masoretic Text?
2 For examples where “night” refers to darkness and not to a specific time of the day, see Ps. 139:11, Mic. 3:6, etc.

“Then Elohim called the light day, and the darkness he called night …”1
Thus the correct understanding of Revelation 21:25 is that during the day and night, there will be no darkness in the New Jerusalem!
Conversely, in the Greek translation the first occurrence of “night” in Revelation 21:25 is omitted, possibly to avoid the seeming contradiction of ‘night’ and ‘no night’ at the same time.
Regrettably, this omission in the Greek version only increases the possibility for confusion, as it suggests that only day will exist but no night.
Now let’s discuss
Revelation 22:5. In the Hebrew Revelation this verse is mostly quoted from Isaiah 60:19!
Oo.1.16:
והירחולא יהיה עוד בה השמש לאור יומם ולנגה והירח לא
יאיר לך והיה לך ה֔ לאור עולם ואלהיך לתפארתך”
=
“And in it the sun will no more be for light by day, neither for brightness will the moon shine for you,2 but YHWH will be an eternal light for you, and your Elohim will be your glory.”
This verse again implies both daytime and night-time, as both the sun and the moon are mentioned! During daytime and night-time the New Jerusalem won’t need any light except that of YHWH!


1 Gen. 1:5, translated from the Masoretic Text.
2 Could also be translated: “And in it the sun will no more be for light by day, and for brightness; neither will the moon shine for you…”

It is noteworthy that the Greek version attempts to simplify the Hebrew readings, and ‘correct’ the seeming contradictions of ‘night’ and ‘no night’ at the same time:

“Night will no longer exist, and people will not need lamplight or sunlight, because the Lord God will give them light…”1
This is typical of translations, and indicates that the Hebrew reading is the original while the Greek reading is a translation which attempts to superficially ‘fix’ the problem.
However, careful study shows that the more difficult, seeming contradictory Hebrew Revelation is perfectly understandable. It matches the Old Testament prophecies about the
permanence of the day-night cycle as well as the Hebrew meaning of ‘night’.
Source: