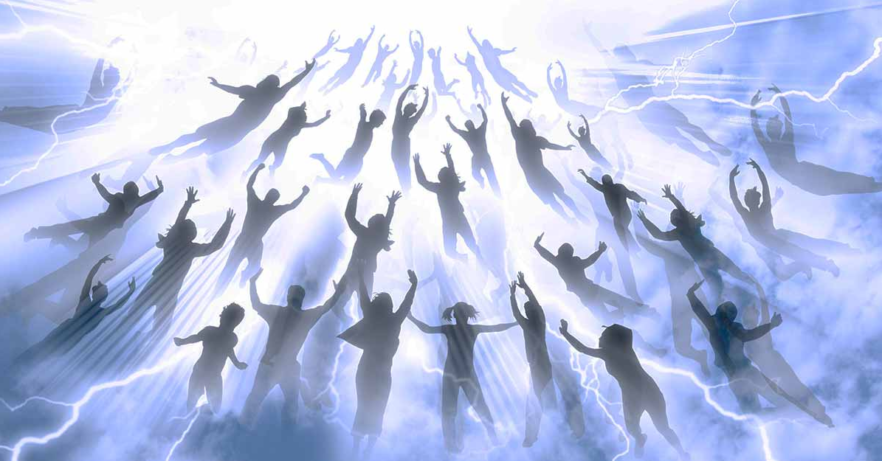 There is a teaching that is widely accepted among Christians called the doctrine of the Secret Rapture. Its proponents maintain that the ‘church’ will be snatched up to heaven and that the earth will continue for a period of seven years called the ‘Great Tribulation’ in which the inhabitants of the whole earth will suffer great problems and conflicts. According to this doctrine there will be a separation between true believers and non-believers before the end of the age.
This false doctrine was introduced at the end of the 18th century by persons who adopted a dispensationalist view of history
(Dispensationalism claims that the Eternal has a set of covenant promises for Yisra’el and another set for the ‘Church’ (body of Christian believers). It claims that there is a covenant given to Abraham for Yisra’el and then there is what is called the parenthesis which is the period of the ‘Church’. There is a big separation between national ethnic Yisra’el and the promises given to the ‘Church’.)

The doctrine of the secret pre-tribulation (as well as that of the mid-tribulation) rapture is totally foreign to the Scriptures and to Hebraic thought. The hope of a secret pre-tribulation rapture gives believers a false sense of ‘peace and security’ instead of teaching them to be alert and to pray for the necessary strength and faith to endure or withstand the coming Great Tribulation, which Yeshua not only spoke about but assured that his followers would go through.

A BIT OF RAPTURE HISTORY
Emanuel Lacunza alias Iben Ezra; Irving; MacDonald; Norton
The notion of the ‘secret pre-tribulation rapture’ started in the year 1747 when an exiled Chilean Jesuit called Emanuel Lacunza wrote a book (published in 1816 in Italy) titled: “The Coming of Messiah in Glory and Majesty”. He wrote under the pseudonym Iben Ezra with the intention of penetrating the protestant world with this Roman-Catholic doctrine. He used this pseudonym to make protestants believe that he was a Hebrew Christian who had adopted a ‘traditional Jewish’ position. Lacunza died in 1801 and in 1812 his book was translated into Spanish and published. A radical cultist and Scottish Presbyterian named Edward Irving translated it into English. At around the same time, an Irvingite evangelist named Robert Norton met a Scottish youngster named Margaret MacDonald who allegedly had a vision of the ‘Church’ being secretly raptured. Norton, who was fascinated with the idea, preached her ‘vision’ throughout England.

John Darby; C. I. Scofield; Hal Lindsay
John Darby, founder of the Plymouth Brethren, became interested in this new doctrine so he attended several Irvingite meetings. In his letters Darby states that he had “come to an understanding of this new truth” and made no secret of the fact that he had been influenced by de Lacunza’s writings.

Darby taught that the prophetic time-table had been paused at the ‘supposed founding of the Church’ in Acts 2 and that the unfulfilled prophesies of Scripture would not take place until after the rapture of the ‘Church’. He claimed that the rapture would be a secret catching away that could happen at any moment.

While visiting the United States, Darby met C. I. Scofield who was so convinced of the Lacunza-MacDonald-Darby ideas that he included them in the notes of his now famous Scofield Reference Bible.
Many who read this version of the Scriptures accepted the rapture influenced notes as authoritative and began spreading these teaching in their own churches making the rapture a common belief among Protestants. The Scofield Bible became the most widely read version of the Scriptures in the English language selling over 3 million copies in the first 50 years. Thus, this disguised Catholic, Jesuit idea spread throughout the ‘Christian’ world.
Albertus Pieters writes

…If Darby and his school are right, the entire Christian church, for eighteen-hundred years, was wrong on a vital part of the Christian faith
Candid Examination of the Scofield Bible, Albertus Pieters, (Union City, PA, Bible Truth Depot, 1932) pp 25, 27)

It is almost impossible to believe that major end-time doctrines of the Protestant church began in the minds of a couple of Jesuit priests, one of which wrote under an assumed name . . . and even more unbelievable, that those views were amplified by the supposed vision of a fifteen year old girl who had only been a Christian for a year, dabbled in the occult and had a documented levitation.
An End Time Myth – Ellis Skolfield

In the 1970’s Hal Lindsey popularised this false theory even more by writing a book called “The Late Great Planet Earth”. The New York Times declared it to be the bestselling nonfiction book of the 1970’s.
Two decades later, Tim LaHaye and Jerry B. Jenkins published the ‘Left Behind Series’ (published 1995 – 2007) adding further comment and popularity to the theory. This series of books became bestsellers and sold in excess of 65 million copies. Among other things this series taught that the people in Messiah were taken away and the evil ones were left behind, which is the opposite of what the Scriptures teach us.

WHAT DO THE SCRIPTURES SAY?
The word ‘rapture’ does not appear in Scripture nor does it teach that Yeshua will secretly come before the tribulation to take away those who are in Messiah and then come a second time after the Great Tribulation. More importantly, Yeshua never taught this doctrine.

Rapture comes from the Latin word «rapturo»: to seize, snatch, carry away…
A word of similar meaning is used in the Tanach when Eliyahu (Elijah) was snatched up in a whirlwind, but as we saw in another article, he was not taken to heaven but translated to another place – see ARE ENOCH AND ELIJAH IN HEAVEN?

In the Nazarene Writings (so called New Testament) the equivalent word is «harpazō», Strong’s G726: catch up, take by force, catch away, pluck, catch, pull.

Let us examine the verses often used to attempt to prove the rapture theory:

1) These verses describe the victorious coming of Yeshua and the resurrection of the dead in Messiah. They talk about a <shout> and <the trumpet of the Eternal> announcing the Messiah’s arrival and not a quiet secret taking away as the proponents of this false doctrine claim.
2) If <the living do not precede the dead>, how are believers raptured before the Great Tribulation?

The dead in Messiah will rise first. This is the first resurrection described in Revelation; however this occurs after the tribulation when Messiah returns to set up his kingdom (Revelation 20:4-6). The dead and remaining living in Messiah shall be caught up in the air to welcome the King Messiah but this is not to say that they will remain there.

This verse is often taken out of context by the ‘rapture theorists’. The context of the entire chapter is the resurrection of the dead at the coming of the Messiah.
As Messiah’s body changed when he resurrected, our body will be changed into an immortal spiritual body (1 Corinthians 15:42-44).
We must obtain a spiritual body before we can enter the Kingdom of the Eternal because corruption cannot inherit in-corruption (1 Corinthians 15:51-55).
This event and the one described in 1 Thessalonians 4 are one and the same and takes place after the tribulation. The entire chapter is about the resurrection of the dead and not a pre-tribulation rapture.

YESHUA SPEAKS ABOUT END-TIME EVENTS
In Matthew chapter 24 we find Yeshua’s disciples asking him what would be the sign of his coming and of the end of the age. This chapter is also used by the rapture theorists

This verse is not speaking about the people of the Eternal ascending into the air and the non-believers remaining, as believers in the secret pre-tribulation rapture claim (Left Behind Series).
Luke 17 further describes the last days

In the days of Noah and in the days of Lot (Sodom and Gomorrah), who were left?
It was the people of the Eternal who remained on earth and the others destroyed, quite the opposite of what the secret rapture doctrine teaches.

A DANGEROUS DOCTRINE
Many believers have been deceived and believe this doctrine which is dangerous because it convinces them that they will not go through the Great Tribulation instead of admonishing them to be alert, prepare and pray for what is soon coming. It makes them feel comfortable in the face of evil because of the belief that they will be snatched away to heaven before deaths and persecutions take place.

TRUE BELIEVERS WILL FACE THE WRATH OF THE ADVERSARY
True believers, those who follow the Lamb wherever he goes, the children of the Eternal, will not have to suffer the wrath of the Eternal in the last days, however they will be the target of  the Adversary and will face his wrath.

If you are a follower of Yeshua and alive in the last days you will surely be persecuted, tortured and even killed. Do not be deceived by the rapture doctrine, we must be alert and pray that we are able to endure what is to come.
However, we must not fear nor loose hope because our suffering will only be for a short while and then Yeshua will return. Come, Master Yeshua!
Source: Ellis Skolfield; Dr Jordan Cooper; Lex Meyer