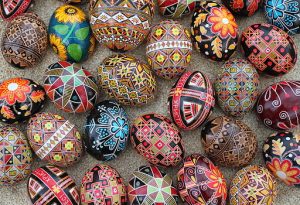 What do coloured eggs and bunny rabbits have to do with the Messiah and his teachings? Have you ever wondered? Where did the Easter parade and hot-cross buns come from? What about Easter sunrise services? Millions of people assume that the time-hallowed customs are Christian and must, therefore, date back to the early Christian Church. Yet few know the real origin of Easter, or why the Christian-professing world, today, observes this particular holiday.

“The custom of exchanging eggs began in ancient times. The ancient Egyptians and Persians often dyed eggs in spring colours and gave them to their friends as gifts. The Persians believed that the earth had hatched from a giant egg.”

Such is the history of Easter. The popular observances that still attend the period of its celebration amply confirm the testimony of history as to its Babylonian character. The hot cross buns of Good Friday, and the dyed eggs of Pasch or Easter Sunday, figured in the Chaldean rites just as they do now.
The “buns,” known too by that identical name, were used in the worship of the queen of heaven, the goddess Easter, as early as the days of Cecrops, the founder of Athens — that is, 1500 years before the Christian era. “One species of sacred bread,” says Byrant, “which used to be offered to the gods, was of great antiquity, and called Boun.” Diogenes Laertius, speaking of this offering being made by Empedocles, describes the chief ingredients of which it was composed, saying, “He offered one of the sacred cakes called Boun, which was made of fine flour and honey.” The prophet Jeremiah takes notice of this kind of offering when he says, “The children gather wood, the fathers kindle the fire, and the women knead their dough, to make cakes to the queen of heaven.” The hot cross buns are not now offered, but eaten, on the festival of Astarte; but this leaves no doubt as to whence they have been derived
(Hislop, p. 108).

The vitally important question is: What does YEHOVAH say about taking pagan practices and “making them Christian”?
Those are plain words.
God says in the Bible that Satan the devil <deceiveth the whole world> (Revelation 12:9). Do you want to go along with the world in its deception? Speaking of the religious system and customs of this modern world, God says to His people:
Should you simply go along with the crowd and attend Easter services? YEHOVAH says:
YEHOVAH God sent ancient Israel into captivity because that nation forsook His commandments and began following pagan ways and incorporating pagan traditions, customs, and superstitions into the worship of YEHOVAH (see 2Kings 17; Jeremiah 44; Ezekiel 8). Should we imitate their mistakes?
The question is whether or not we are willing to trustfully obey YEHOVAH God, even when we do not fully understand why He tells us to do something. To learn this kind of obedience based on faith is of decisive importance not only for our life here and now, but also for all eternity.
Whether or not we observe pagan customs labelled “Christian” makes a great deal of difference to YEHOVAH. Therefore, let’s get back to the pure, unaltered and unadulterated faith which was once delivered to the saints.
Edited By John D. Keyser.
www.hope-of-israel.org